Not exactly. That will require the finding of the camera.

But as an experiment, I attempted to recreate the photo here using the camera on my MacBook.

Erm, not so successful.

But, anyway, a few notes and a picture to hold this space until I put the real post together. 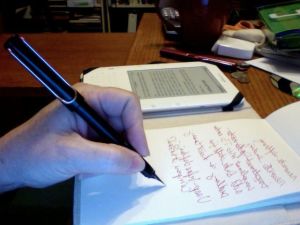 Picture backwards… Okay, that?  I have no clue.

[Note: And don’t think I’m not going to blog the Dallas Cowboys being the best, and Hollywood proves it, anyway. Ahem.]

No, I don’t really think these are stupid. But I called them that because, well, whatev.  I just did.

The first time I sold a novel, I wrote it with a certain voice in my head, a voice that ran on and on in endless sentences.  (Well, okay, that voice is still there.)  Sometimes I’m not even sure the sentences had verbs. Somehow that book sold.  It was a pretty good story.  The story, adapted, won me my Nicholl.  (I make that point because talking about my endless sentences-maybe-without-verbs might make you wonder.)

And when I got the galleys–the page proofs that look like the book will look, because it has been typeset and now all we’re looking for are typos and such–I suddenly heard the book in a different voice.  It was no longer the voice that crooned the story into my ear with dulcet siren tones.  It was a crisp, professional voice that made every little odd quirk stand out and scream “unprofessional” to my ears. It was a wakeup call and a learning experience. (I hope.)

From that point forward I played games with myself, trying to trick the voice in my ear.  I have printed out my completed manuscripts on colored paper

(pretty purple, guess what color I’m buying next!) and using a different font so that it looks totally different, and that really helps.  It rattles the voice a little, and makes it easier to spot problems. When I first started writing the current novel, I printed the opening chapters in a pretty copperplate, just to get a historical voice in my head when I was reading. And these stupid writer tricks help me, help me a lot.

My Kindle has opened up new avenues of voice-trickery.

I routinely convert documents to pdf files, then import them into calibre (a free conversion program) which in turn, converts them to mobi and loads them onto my Kindle.

And… wow.  This is like getting galleys for myself.  Seeing the book all looking book-like on my Kindle screen. It’s like holding the published book in my hands.

The voice, she is different when I read this way.

Oddly, I’ve gotten so hard on myself, the book sometimes looks better on the Kindle, reassures me that it actually is working.  Other times it makes problems stick out. I can highlight and make notes with the Kindle if I want, or just keep a moleskine

handy to scribble on. (And by the way, that moleskine? The large with lines? Is impossible to find any more. I looked in various local stores and finally had to order from Amazon.)

Today I learned a new Kindle trick.  I mean, I already knew it. Text-to-speech. Yes, it’s a computer voice, but the male voice isn’t awful. (The female is.)

It has taken me a while to write the last 25,000-ish words, and somehow going back to reread felt like scraping my fingernails on a chalkboard. So I loaded them into the Kindle, and let the Kindle read to me.

It was astounding. Computer voice, yes, but that meant it didn’t rise and swell and dip and whisper with emotion or rhythm, just spit out the words. And listening to the words… helped.  Helped in new ways.

I know people who read their work aloud and swear by it. That doesn’t help me. I hate my voice, and when I read aloud I hate that words that are being spoken by an English girl in 1811 sound ridiculous when spoken by a middle-aged Texan. Stilted and awkward in a way they don’t when read silently. Somehow, listening to the computer voice doesn’t bother me as much. Don’t ask me why. I can’t explain.

But more to the point, when I read, I see individual words and remember the struggle to find the right word, and does this one really work, and I get caught up in word-by-word reading.

When the Kindle reads to me, the words simply flow. The story flows. I hear the big picture flowing over me, without pausing to ponder, worry, re-edit.

Tell me a story…

My Kindle was telling me a story, and to my wondrous ears I realized… I love it. I love this story as much now as when I started it. And more importantly, things that I struggled for weeks to get right with all sorts of tweaking and massaging and slicing and dicing and suddenly thinking of a description that might improve things and sticking it into a scene I wrote last month and–

Yeah. I did mention the runon sentences, didn’t I?

Instead of seeing all that on the page, I simply hear a story read into my ears.

I love my Kindle.

I love my story.

And right now? I love writing.

Tagged as amazon, Kindle, Moleskine, the novel in progress, Writing