My ‘Boys are done.

I am not going to survive this game.

It is weekends like this that I am blessed to be a Cowboys fan. 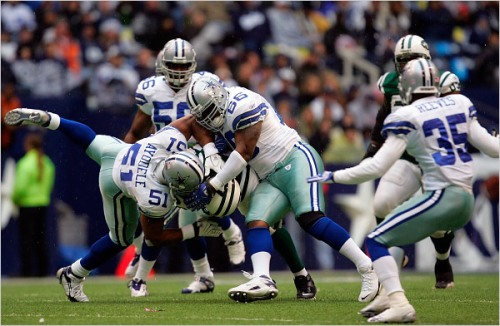 It’s a meme, thanks to Candace.

2. Players start with eight random facts/habits about themselves.

3. People who are tagged need to write on their own blog about their eight things and post these rules.

4. At the end of your blog, you need to choose eight people to get tagged and list their names.

Don’t forget to leave them a comment telling them they’re tagged, and to read your blog.
***

Here are eight random facts about me. I’m including some that some of you know, because some of you don’t know them.

1. I once made a pumpkin pie from scratch, meaning, from taking a whole pumpkin and cutting it up and baking it and scraping the pumpkin stuff out instead of using canned pumpkin — and I don’t even like pumpkin pie.

2. I am the only person in the history of the Nicholl Fellowships in Screenwriting who was a finalist twice with two different scripts, and won.

3. An early version of the script that won once had Sissy Spacek, Gary Oldman and Alfred Molina attached with Melanie Mayron to direct, and still didn’t get produced. Sigh.

4. If someone has a few million to toss our way, we could rectify that error. Ahem.

5. My favorite Cowboys are Harvey Martin (may he R.I.P.) and Michael Irvin.

6. My father was at Dealey Plaza when President Kennedy was shot.

8. I married my high school sweetheart.

I don’t know 8 people who would want to be tagged or wouldn’t mind being tagged, so I won’t tag anybody. But if you want to be tagged, please respond here and let me know and then do the meme!

The question has been asked, Are you happy with the Cowboys’ recent choice of Wade Phillips over (the supposed favorite) Norv Turner?

I don’t know much about any of this. The talking heads around here all seem to think it’s a smart and safe choice. Mainly, since he’s a defense guy, I’m pleased. We need a defense guy.

I don’t have anything more interesting to say right now. I’m kind of sad that Anna Nicole Smith died, though I don’t know why because I don’t know much about her. It just seems she was a sad and lonely little girl.

which I liked so much in audio that I immediately ordered it in hardcover and am going to read it now.

And unless I finally shake it out of my head, I’m going to write what is probably the grosses blog entry I will ever write. I’ve been fighting against it for three or four days now.

I don’t know that I can win this battle.

One out of Three

He made the Hall of Fame.

I looked for a picture that defined Michael Irvin and couldn’t find one. When people say he was the heart and soul of the Dallas Cowboys in the 90s, these are not idle words. But I couldn’t find a picture that really showed one of those lightning bolt moments, though there were many.

Whether it’s a book or a movie or music, I respond to emotion and passion. And Michael Irvin is sheer passion, emotion, energy. I’ve never seen a player who looked so much like music in motion on the field, whose passion fed everyone around him, whose energy could sometimes lift a team from defeat to victory. Cowboy fans saw it happen many times. That’s who he is, what he was, and I’m glad those who hold the keys were satisfied to spank him twice, and then let him in.

And of course, the fabulous Drew Pearson deserves to be in the Hall more than so many who have been voted in ahead of him. All anybody had to do to get voted in from the 70s was wear a Steelers uniform. The Cowboys with their impressive two Super Bowls in the same era only got, what, three in? I’d have to look it up, but it’s a shoddy showing compared to what lesser teams from the same era got. (I’m not saying the Steelers were a lesser team, but I’m definitely saying lesser players from the Steelers are in the Hall.)

So, one out of three. Michael made it, and I know a lot of happy people. The Resident Storm Chaser and I were out at Carraba’s today eating Italian (delicioso!) and I mentioned to the waiter that Irvin made it in. His mouth fell open — he was delighted. And behind me I heard gasps, and beside me I heard gasps, and looked up to see table around me where people were staring, beginning to smile, to grin. “He did? He really did?”

“If LT did, they have NO reason to keep Michael out,” one woman huffed.

And suddenly, instead of isolated tables of quiet diners, we were community, and celebrating, and it was joyous.

Michael made it in, and I am glad.

And this is the picture I found. Not what I was looking for, but it does speak volumes in its own quiet way. What does a tough football player do when one of his teammates leaves the field injured?

Well, this is what Michael did to Kevin Mathis.* 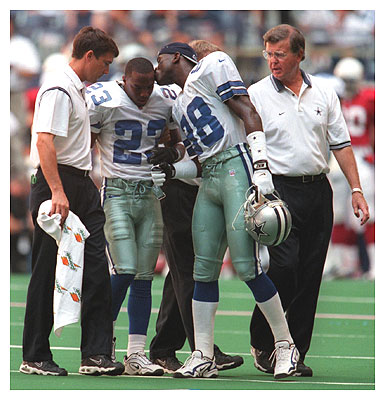 Kiss it, make it better?

One out of three?