A hot summer night, a crowded bookstore teeming with customers. Dozens of readers, all ages, snaking around the rows of books, waiting for midnight to buy Harry Potter and the Half-Blood Prince.  One side of the store was for those with pre-orders. The other side was for the rest of us. And so we sat, reading books we’d brought with us from home, listening to iPods, chatting softly.

I was alone, sitting in the middle of the Ns. I glanced at the bookshelf beside me. 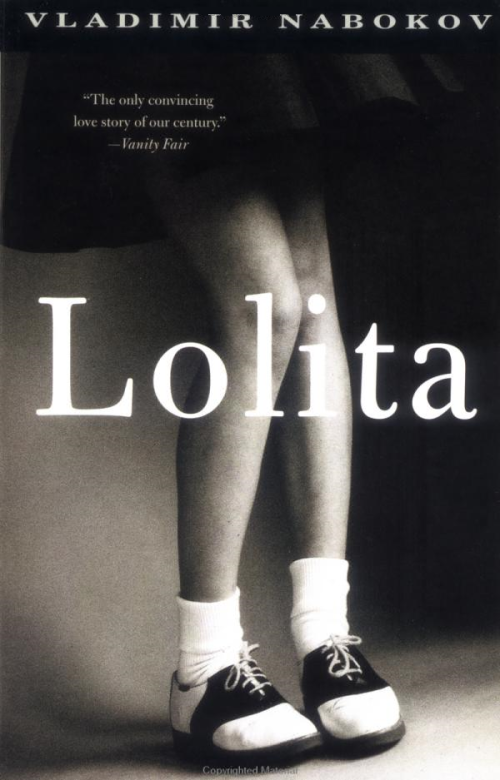 I’d never read it, nor had I seen the movies. I was curious and bored so I opened it and read the opening two paragraphs–

Lolita, light of my life, fire of my loins. My sin, my soul. Lo-lee-ta: the tip of the tongue taking a trip of three steps down the palate to tap, at three, on the teeth. Lo. Lee. Ta.

She was Lo, plain Lo, in the morning, standing four feet ten in one sock. She was Lola in slacks. She was Dolly at school. She was Dolores on the dotted line. But in my arms she was always Lolita.

–and fell under the spell of a Russian writer who felt his English imperfect. (The mind boggles.)

Ironically, I was there to buy a children’s book and ended up with Lolita in my hand.

Ironically, after keeping it with me for almost an hour, they wouldn’t allow me to buy it. Only the one book could be bought after midnight that night–the one we were all in line for. Otherwise they feared they’d never close.

Ironically, both books are near the top of banned book lists.

Me, a few years later, browsing through the offerings on audible. And what should I find but… Lolita. 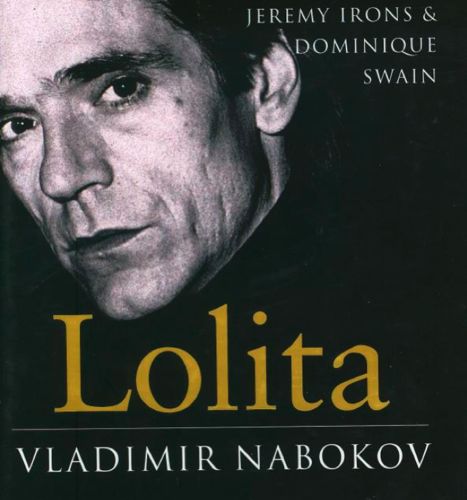 Read by Jeremy Irons. Nabokov’s words in Irons’ voice. If the devil has truly mastered temptation, surely this is it? I could not resist, reader. I could not.

And thus I discovered the exquisite language of Nabokov in a disturbing but beautiful book that transcends the sum of its parts.

How do you justify Lolita to those who are horrified by its subject matter? You can’t. This book was once banned in France. In France. Its subject matter is an adult man obsessed with–in love with–a very underaged young girl.  And he acts on it.  But don’t be misled. It is more than that, much more.  Lolita has been named one of the most important books of the 20th Century, one of the best books of the 20th Century, and it is, oh reader, it is.  I could rattle off its use of the unreliable narrator, of a point of view that left me, by the end, questioning much of what I’d assumed with my head spinning.  I could post quote after quote–from reviewers, from the work itself–and I woulld not change your mind.

Nor would I want to.

I understand, you see. I understand why so many will never want to read this book.

I understand and I would tell you, if you read that opening and didn’t find your spine tingling just a bit at the language, if you didn’t feel the pull to keep going, then don’t read, don’t approve, just don’t.

Don’t ban it. Don’t remove it from library shelves so that others must live without choice, because you decided your choice should be for all of us.

A place in which one of those most stunning books in the English language is banned.  A book that doesn’t justify its crime. A narrator who admits his sin.

This is not a place in which I want to live.

Nor do you, reader. Nor, really, do you.

From Salon.
.
Some say the Great American Novel is Huckleberry Finn, some say it’s The Jungle, some say it’s The Great Gatsby. But my vote goes to the tale with the maximum lust, hypocrisy and obsession — the view of America that could only have come from an outsider — Nabokov’s Lolita. The author had in earlier versions set the story in Europe with a French temptress, but that could never have been — there is something quintessentially, inevitably American about the novel…. Those who bought “Lolita” looking for mere prurient kicks must surely have been disappointed. Lolita is dark and twisted all right, but it’s also a corruptly beautiful love story of two tragically alike, id-driven souls… What makes Lolita a work of greatness isn’t that its title has become ingrained in the vernacular, isn’t that was a generation ahead of America in fetishizing young girls. No, it is the writing, the way Nabokov bounces around in words like the English language is a toy trunk, the sly wit, the way it’s devastating and cynical and heartbreaking all at once. Mary Elizabeth Williams

Friends and colleagues discouraged Nabokov from publishing Lolita. The chronicle of seduction between the middle-aged Humbert and the pubescent Lolita threatened to be controversial. In the end, it was his wife, Véra, who convinced Nabokov to proceed. Despite the warnings of friends, Lolita appeared in Paris in September 1955, published by a press better known for its pornographic stock than for its efforts to make the works of Jean Genet, Samuel Beckett, and Henry Miller available to a wider reading public. The book’s appearance sparked a flurry of publicity in France, where it was banned as a “dangerous book” until 1958. Lolita would eventually be banned in England, Australia, Burma, Belgium, and Austria and, at the local level, in some American communities. The controversy over the book only fueled sales. On September 17, 1958, the Cincinnati Public Library banned Lolita. The following week it reached number one on the bestseller list.

3.4. I don’t think it should be banned, of course. Honestly before we read this, I thought it would be more provocative than it is because I heard it was a banned novel in many places in the U.S. But it’s not that provocative afterall. More importantly, this is a literary masterpiece. The art far outweighs the maybe provocative aspects of the book. Come on, are we going to ban the painting by Sandro Botticelli, The Birth of Venus, just because it is “provocative?”

Hit me with it. Cancel reply